Ten Hours in an Avensis

I have posted my thoughts on certain cars here before, so regular readers will know I am somewhat critical of things automotive. Recently, I had the pleasure of a meeting in Dumbarton, Scotland. This meant getting there and back in a day, a journey that would take 10 hours driving. Not including stops. On top of the two-hour meeting. Needless to say I was hoping for a decent car. [spoiler alert] My hopes were dashed.

I had thought about this drive when out strolling, and came up with a few things that would make the trip manageable, without expecting miracles:


To my dismay, the car turned out to be a 2011 Toyata Avensis. With a petrol engine.

I shall not rant, but try my best to present my opinions objectively. It is worth noting that the car was well-specced; all conceivable extras seem to have been chose (reversing camera, satellite navigation, 6 CD changer, air conditioning) with the exception of leather upholstery.

I'll get straight to the bad points seeing as these frustrated me the most. But, being ever the geek, I will group them.

Driving experience. The obvious one was the serious lack in power. At motorway speeds the accelerator pedal did little more than cause more noise, although, slowly, the vehicles velocity did change. For any spirited lane changes, one needed to increase the engines leverage on the wheels. By two gears. The gearchange was a big let-down as well, giving the driver little real feedback, instead a feeling of "afterthought engineering" resistance, but in the wrong places.

Infotainment. Having seen the high spec of this particular car, I was pleasantly surprised, imagining a blissful trip. That pleasantness soon began a transition to its antonym. The infotainment system was unfathomable, with a display that looked like something from a Japanese luxobarge from the mid 90's. I couldn't figure out how to turn off the navigation without ejecting the SD card containing the mapping (that's coming from a self-confessed tech geek). On a smaller, slightly more confusing note, there was no AM tuner on the radio - a pretty small thing to omit, preventing the occupants from BBC Radio 5 Live.

Interior ergonomics. For something with inherently few options for their placement, the steering wheel controls managed to seem very awkward to reach. Not so much that a hand had to be removed from the wheel to use it, but sufficiently awkward that hands had to be strained to use them. The plastics and switchgear gave an feeling of cheapness, but while trying to give the impression of high quality to compete with the top German makers (BMW, Opel, VW). I can't help but be saddened somewhat by this pretence - the car is no longer an honest machine.

Engine power aside, the Avensis performed well on the motorway, offering good isolation from road noise and cruising comfort. Interestingly, given the modest and often frustrating power deficit, its natural gait hovered around the 85 mph mark. The door "thunk" was also satisfying, strange, given that the interior was so low rent. Another pleasant surprise came in the form of the seats. On initial seating, they seemed to lack the physical and visual features one would normally associate with supportive seats, but after a 16 hour day - including 10 hours behind the wheel - I was rather fresh.

My impression of the Avensis changed quite a bit between collecting it and returning it. On seeing it I was impressed - still thinking it had a diesel engine. That went down steeply when I got inside, and plummeted further in the first 5 minutes driving it. It began redeeming itself the following day, and continued to do so during the trip. However, it's journey to redemption didn't claw back enough to make up for the dismal impression it made in my first half hour with it. 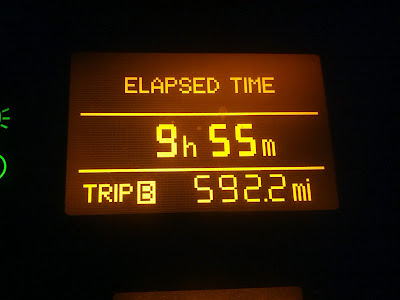 Conclusion? I couldn't recommend one to anyone of my friends or family. For the cost, a much better car (of the same age and type) could be had. But it wasn't all bad, it did have good qualities, just not good enough. These were also countered by a lot of bad features, as well as a pretty dismal first impression.

P.S. I can be positive about hire cars. I had 2012 Vauxhaul Astra diesel two weeks ago: fantastic car. Well specced, borderline unbelievable power and refinement. I also had a 2011 Nissan Micra a few months back: until the Astra, this was head and shoulders above any other hire car I had. Simple, buts honestly simple, no pretence.

P.P.S I wrote this in WriteMonkey a distraction-free text editor. Check out their awesomely bloat-free application here. Hence the break in tradition; I wasn't listening to music while writing this, forgive me.